Where did July Go? 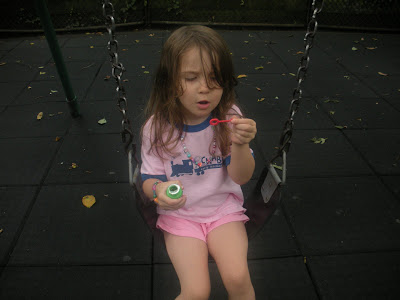 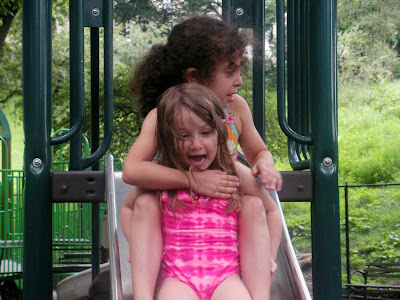 This was my last week with just D and T. By the time I finally post this I'll have a full house again. July was such a great month. Maybe with twice the kids August will be twice as good. Here was my schedule for last week.

Monday: In the morning we took the bus to Fairway, shopped, dropped off our frozen food at home and then went to the Bloomingdale branch of the New York Public Library . The first thing I needed to do was to return 3 books from last summer and pay my $139 fine (Yes, that is what it costs when you do not return 3 books to the library for almost a full year). After I finished at the front desk, we went upstairs to the children's library and saw a great program about people with disabilities. It explained what it was like to have a disability in a fun and non scary way using books, songs and puppets. Both of the girls enjoyed the almost hour long program (and so did I).

After we were done we looked at and picked out a bunch of books to check out. D was so excited to have 8 new books to read. We will hopefully be going back to the library before next summer to return the books and get some new ones. On the way home we stopped off at the small park on the same block as the library and the kids played for about a half hour. Later that evening I took the girls to Mike's Pizzeria and Italian Kitchen for dinner where we had a delicious meal and the best chocolate mousse (made with good chocolate and cream) for dessert.

Tuesday: We had our 3rd lesson at the Ice House in Hackensack and the new skates that I bought T made a big difference. She was really doing a nice job skating with out holding on. I got a call from my brother in the afternoon that my mom had gone to the emergency room with severe pain in her upper abdomen. Thank G-d it turned out to be only a bad gallbladder. She ended up having it taken out on Thursday. I was definitely thrown for a loop. My mom has been pretty healthy so I just don't expect that she would be sick enough to go to the hospital.

Joy came at 4PM and took the girls to gymnastics while I went to yoga and then met J at the movies. We saw The Hangover. I think we were the only 2 people in the theater who didn't think it was funny.

Wednesday: We went to Swedish Cottage in Central Park to see Peter Pan which the girls really enjoyed. After the puppet show we has a picnic at the Great Lawn. The girls had a great time running all over the lawn in bare feet (a luxury for us city folks). On our walk out of the park we stop off at the Mariners Playground at 85Th Street where the girls played for about an hour before we went home.

Thursday: Joy came at noon and took the girls to open gym time at New York Kids Club and I went to visit my mom at the hospital in Manhasset. If you know me, you know what a terrible sense of direction I have. When I have to go somewhere I've never been I get very stressed. The chances of me getting lost or making at least one wrong turn is about 95%. Thankfully, we recently got a GPS so I was able to find my way there with out any problems (and with out uttering any words that one might find inappropriate). I was even able to find Michael's in Manhasset after I left the hospital and then I managed to made my way home.

When I got home our neighbor E was at our house. She had just gotten back from camp and the girls were so excited to see her. I had picked up some new beads and paint at Michael's that the girls decided they had to use right away. They spent most of the evening playing and creating together which meant that I was able to get some Shabbat cooking done. I made turkey burgers for us for dinner and thankfully Josh came home in time to remind me that it was the nine days before we ate them.

Friday: We did some cooking for Shabbat in the morning and the girls made a bunch of beaded name necklaces for the friends that we were meeting that afternoon at Hippo Park The girls played for a couple of hours before we came home to get ready for Shabbat.
Email Post
Labels: Fun NYC Activities for Kids Home Camping Kids