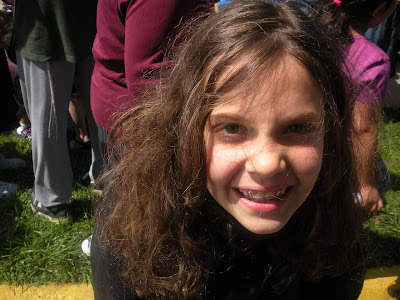 Well it's official 2 kids are easier than 4. My big kids are home from camp and the routine I had has been knocked for a loop. Things have been a little crazier than they would have been if my mom had not had her gallbladder removed 10 days ago. As much as I love my mom I would not have seen her 5 times in 14 days under normal circumstances. I will chalk up the past week to the unreliability of life.

I went to pick up R late Monday morning in New Jersey. She had that I've been in camp for the past month look. She needed a bath and a hairbrush! She did look adorable and I was very excited to see her as were her sisters. I wanted to visit my mom with the girls so we made a pit stop at home and then drove out to Long Island. We made my mom the tissue paper flower garland that I found on Origami Mommy. It is a great project for kids and even D was able to work on it. Everyone was glad to see everybody and the girls had a great time playing with my mom's housekeeper Jillian's very adorable one year old. 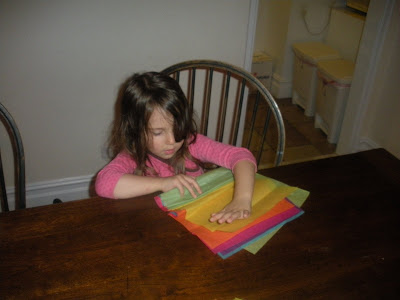 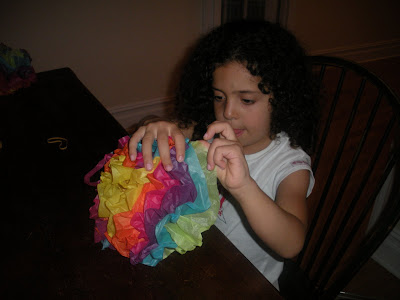 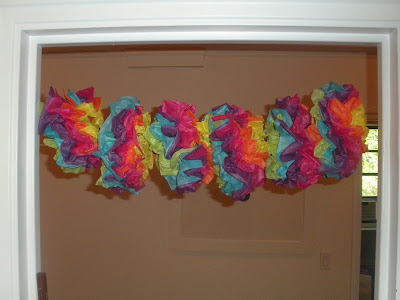 Tuesday was the day that Z came home from camp. Joy came at 10:30 so I did not have to shlep the girls out to NJ with me. Z's bus was already there when I got there so I found him and his bags and we went back to the city. The girls were very happy to see him and all of them gave him a big welcome home hug. Z, of course, had to run to get lunch at the bagel store.

We had stopped at Michael's on the way home from my mom's and had bought some new beads and stickers so the girls spent most of the afternoon drawing and making necklaces, bracelets and anklets. Z just hung around at home getting reaclimated to city life. Of course now that I was done with R's laundry we had to start on Z's. Thankfully, Joy was there to help!

Later in the afternoon Joy took D and T to gymnastics and I went to Barnes and Nobel with R to pick up some Archie comics (I was so excited that she was reading them. I used to love them when I was her age.) We also picked up some new Candy Apple books that a friend of hers had recomended to her (by the way, this is a great series). It was so nice to have some time with her alone.

Wednesday was a very rainy day in New York. Whenever we got motivated to go out it began to pour. We really didn't do anything. Z hung out with some of his friends. Our neighbor E came down stairs and the girls spent time drawing and playing. The girls ended up going upstairs to E's for a while in the afternoon. At some point late in the day D and I went to Starbucks just so we could get out of the apartment. That was pretty much it for the day for us.

Thursday was Tisha B'Av, a Jewish fast day. I went out with the girls in the morning to our neighborhood library when I knew I would still have some energy. Joy came at 1 and took D to Hippo Park. T,R,Z and our neighbor E hung around and watched too much TV. When I woke up from my nap I told T she could watch another TV show since I was so beat from fasting (no water is allowed!). T told me that this was the best day ever because I was letting them watch everything they wanted to watch (well almost everything!) on TV.

Friday I took all the kids to visit my mom. She is doing much better and the kids had a great time with the dogs (my mom has 4!). By the time we got back to the city it was time for us to get ready for Shabbat.
Email Post
Labels: Crafts Crafts for Kids Fun NYC Activities for Kids Home Camping