Home Camping: Getting Into A Groove

I can't believe that this is the 3rd week that R and Z have been away. I feel like the summer is just flying by. The past few weeks that I've had T and D home have been great. After our initial flurry of activities things have definitely mellowed out. I'm surprised at how happy they are to just be at home. This week we ended up doing a lot more art than we did last week.

It's been interesting to watch the girls interacting with each other. They have been spending the vast majority of their time together. They seem so close, like a small, tight unit. It's hard to believe that T will be going away to camp in a few summers. I feel like the days that they have together are so precious.

So here is last week's schedule:

Monday: We had our second ice skating lesson at the Ice House in Hackensack. Everyone did much better than last week. T was skating more on her own and D took a few steps with out holding on to Gina (our ice skating teacher). When T got off she told me that her feet hurt so I took her in to the pro shop to see if her skates still fit. Guess what? They didn't so I had to buy her a new pair. It will be interesting to see if the new skates make any difference in her skating this week.

After we got back to the city we got some lunch and headed over to our friend's house. The kids had a great time playing together and I got to have some adult conversation.

Tuesday: A few summers ago I had taken the kids to the Heckscher Playground in Central Park and we had a great time. I've been meaning to get the kids back there since then and I finally did. Yikes! It was so crowded. It seemed as if half of New York (and half of Europe) was at that playground Tuesday morning. The playground had a great sprinkler and winding river that went up to and connected to one of those giant boulders in the park. The girls ran off and started running "up" the river. 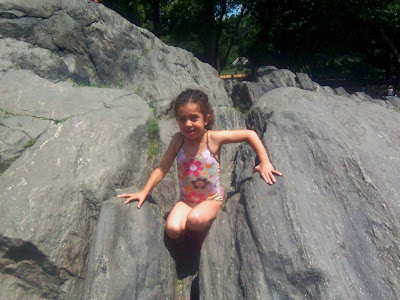 I was having a particularly tough time keeping my eyes on them because I had scratched my eye and only had in one contact lens (note to self: do not go to a crowded playground with only one contact lense in). All of a sudded the play ground was invaded by 3 different large camp group. I told the girls it was time to leave and we got out of there as fast as we could.

I felt like our morning was not going well when the girls suggested that we go to the Central Park Carousel. As crowded as the Hecksher Playground was the carousel was empty. We got to go on 3 times in a row. I actually got to ride on one of the horses for he first time in 9 years (I always had a baby with me and had to ride on the couch). I forgot how much fun it is. The girls would have gone on again but we needed to get home because Joy was coming and I had some errands to so.

Joy took the girls to gymnastics and I met my husband at the movies. We saw Bruno and we thought it was hysterical, although somewhat horrifying.

Wednesday: We had tickets to The Little House of Cookies a cute musical at Tada . After the show we took the bus to Magnolia Bakery (yes, kosher people, I eat there and I'm fairly certain that I will not be served trief hot dogs like some people recently were at a glatt kosher restaraunt Brooklyn). 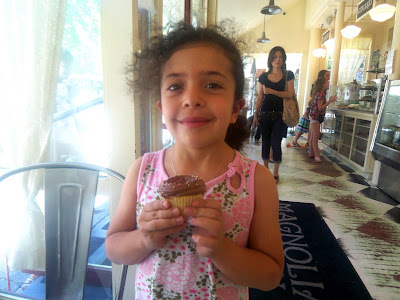 After some delicious cake, cupcakes and cookies we headed home. I had seen a cute snail project at No Time for Flash Cards and decided that we should give it a try. The girls had a good time doing the project. It was perfect for T but D needed a little help finishing it up. When we cut them out the next day and added the googly eyes we were really pleased with how they turned out. They are now hanging on our front door. After they were done with the snails they wanted to paint so I set them up at the dining room table. 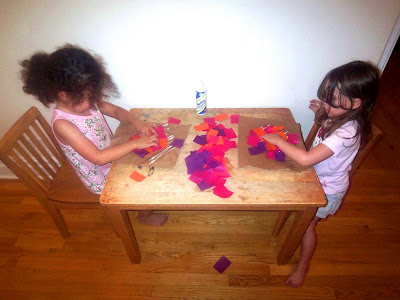 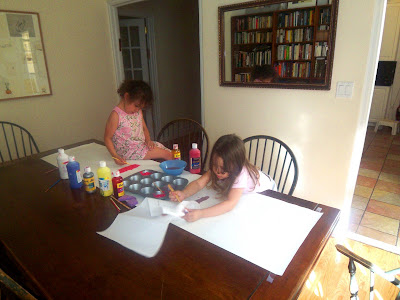 Thursday: The girls and I started our challah in the morning. We also baked some butterscotch chocolate chip blondies (I do intend to post this recipe at some point) and made peanut noodles for Shabbat lunch since we were having guests this week. The girls did some more painting when we were done cooking while I spent a 2 hours trying (unsuccessfully) to download softwear for our computer that we need to get the printer to work. Joy came for a few hours and took the girls to Open Gym time at gymnastics, while I blew off my yoga class to get some alone time at home. 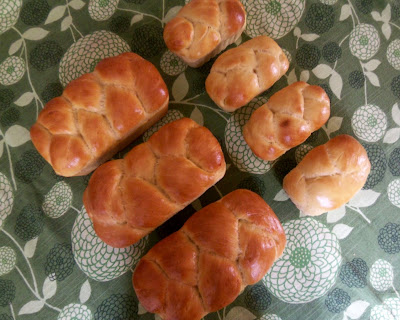 Friday: We baked a blueberry crisp for Shabbat lunch in the morning and then we all went and had manicures. My parents came in for the afternoon so we just hung out at the apartment with them. Giga (my mom) bought T a new camera and Papa N(my stepfather) very patiently taught T how to use it until it was time to get ready for Shabbat (he also spent some time doing math problems with her!).
Email Post
Labels: Crafts Crafts for Kids Fun NYC Activities for Kids Home Camping Kids

Julia said…
Pleasantly surprised by the discovery of your site so pretty and so original, everything is well designed and very beautiful with a lot of choice, it's a wonder !!