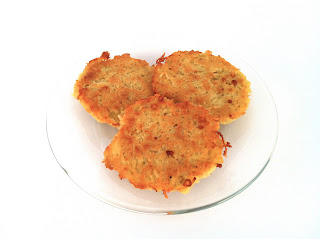 Potato latkes are not just for Chanakah around here. I make them for dinner throughout the year and serve them with a big green salad. I posted a recipe for potato latkes two years ago but noticed that my recipe has changed a bit. Remember that if you are going to freeze them to serve at a later date fry until the are just beginning to turn golden. They will continue to brown when you heat them up. This recipe makes about fifteen three inch latkes.
Equipment:
1. Food Processor
2. Fine grating blade. This does not usually come with the food processor so you will need to buy one. I used to grate the potatoes by hand and it was a big pain. The fine grate makes the latkes closer to the hand grated potatoes than the standard size grater does.
3. Unbleached cheese cloth
4. Frying pan and spatula
Ingredients:
5 lbs Russet potatoes
5 eggs
1/3 cup of sprouted flour (you can use regular flour or another starchy substitute. you are gluten free)
1 large onion
lemon
salt and pepper to taste
Palm oil or refined, expeller pressed coconut oil
1. Grate the onion in the food processor and put it in the mixing bowl
2. Squeeze some lemon juice into the grated onion and combine.
3. In the bowl that you will be putting the potatoes after they have been shredded scramble the eggs and put it aside.
4. Peel 1 potato and cut it into large chunks.
5. Shred the potato in the food processor and immediately add it to the onion and lemon mixture and mix it up. This will keep the potatoes from turning brown. Continue til all the potatoes are shredded
6. Put half of the potato mixture in a piece of the cheesecloth and squeeze out as much of the liquid as you can and put it in a clean bowl. Add them to the scrambled eggs and toss. This will again keep your potatoes from turning brown before frying. Repeat with the second half of the potatoes.
7. Add flour, salt and pepper and mix until it is combined. I like to use my hands!
8. Heat the oil in the frying pan on a medium flame.
9. Fry latkes until they are golden brown on both sides and drain on paper towels.
10. Serve with sour cream and apple sauce
Email Post
Labels: Hanukkah Recipes

Julia said…
Your site is wonderful and diverse. Being disabled and insomniac I am always busy thanks to you.
Good continuation !