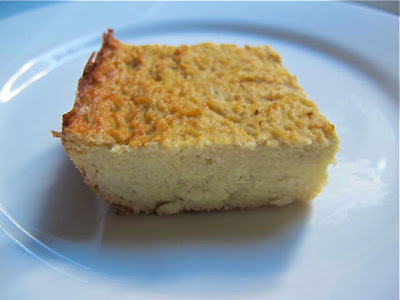 Kugel is the ultimate Shabbat food. It's delicious hot from the oven on Friday night or heated up on top of your cholent pot for lunch. Though I have loved potato kugel since I first tasted it I never made it until recently. It's really hard to get the right consistency and the thought of hand grating 5 lb. of potatoes was not appealing to me. Then it occurred to me that if I cut the potatoes into chunks before I put them in the food processor with the small grating blade that I might actually get the consistency that I was looking for. It ended up working and I have been making lots of potato kugel recently.

5lbs of Russet potatoes
1 1/2 lbs yellow onions
1/2 cup of potato flour or potato starch
1/2 cup of refined coconut oil (do not use extra virgin!) plus oil for the pan
9 eggs
2 teaspoons of salt
lots of fresh pepper
9x13 pan

Preheat the oven to 300 degrees.

Beat the eggs and put them into the large bowl you will be mixing your kugel in.

Cut the onions into large chunks and grate them using the large grating blade.When you are done grating the onions squeeze out the extra liquid and mix them into the eggs.

Add 1/2 cup of coconut oil, the flour or potato starch, salt and pepper and combine.

Julia said…
Hello, your blog is too beautiful! I come every day and I really like it !!! Thank you and good luck!

rosy123 said…
Hello, I discovered your blog this afternoon and I want to congratulate you for the work well done and good luck. Sincerely.