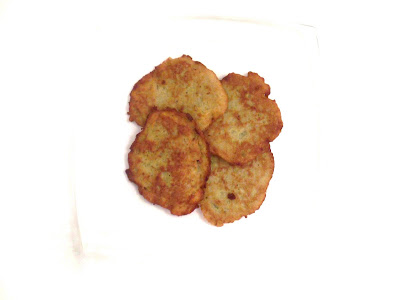 It is customary to eat fried foods on Hanukkah to commemorate the miracle of the menorah oil lasting for 8 days when it should have only lasted for one after the Jews regained control of the Beit Ha Migdash (Temple) from King Antiochas and the Greeks. One of the reasons my family looks forward to Hanukkah because it's the time of year when I loosen up a bit and let them partake in such delicacies.

Potato latkes are a Hanukkah favorite for many people. I was inspired by a recipe I found on Gourmet Kosher Cooking to make latkes that I could freeze so I would not spend all Saturday night cooking and not enjoying our family Hanukkah party. I slightly under cooked them so they wouldn't burn when they were reheated. Make sure you hand grate the potatoes and onion on a fine grater and you will not be disappointed by the results. This recipe yields about 8 to 10 medium (3 to 4 inches) latkes and can be doubled or tripled.

5 medium Idaho potatoes. I use the organic ones so if you know how big they are that's the size you need
1 medium onions
1/2 lemon
4 eggs
1/4 cup flour
1 teaspoon of salt
Pepper to taste
Vegetable oil. I use to use expeller pressed coconut oil (NOT extra virgin) for frying.

1. Grate the onion and put it in a large mixing bowl. Peel the potatoes. Grate one potato and and add it to the onion. Squeeze half of the lemon onto the grated potato and onion and mix them up. This will prevent the potatoes from turning brown. Grate the rest of the potatoes and mix each one into the onion, potato and lemon mixture to keep them from browning. When you are finished grating the potatoes squeeze in cheese cloth or drain the excess liquid from the bowl.

2. Lightly scramble the four eggs and add them to the bowl with the salt, flour and pepper. Combine the ingredients.

3. Cover the frying pan with about 1/8th of an inch of oil and heat it up. Fry the pancakes for 3 to 5 minutes per side. Remember to slightly under cook them so that when you reheat them they won't burn. I found that I could fry 2 batches of latkes in the same oil with out having to change it.

4. When they are cool freeze them. To reheat them first defrost, place on cookie sheets and then bake in 350 degrees oven for 10 to 15 minutes or until they are sizzling.

Anonymous said…
By far the BEST latkes I ever had, unfortunately I ate too many of them! Will be trying this recipe this week.
December 13, 2009 at 5:03 PM