Camp Mom is Back in Session! 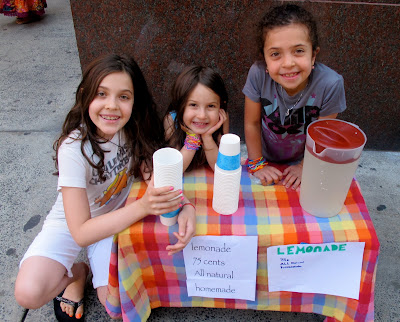 Camp Mom is back in session. No more waking up to catch the bus! We had such a nice week last week. Our summer classes had not yet begun so the girls spent a lot of time playing, drawing, writing and enjoying the freedom of not having anyplace that they needed to be

I felt like Monday was the official start of our summer. Last May, in anticipation of this summer, I bought a tie dye kit and a tie dye book from Dharma Trading. We decided to try them out Monday morning. Our first attempt at tie dying came out pretty good but we definitely figured out that there were a few things we could do to improve our technique the next time. In the afternoon we went to the park on 89th St with the great sprinklers.

Tuesday morning we went to check out the sidewalk sale at Lester's and found a few things that were on super sale. Afterwards we stopped at Bloomingdale's to check out the sale they were having. We were hoping that we might find some clothes that would be appropriate for Shabbat for R and T. Of course we only found an everyday dress for D, the only one of my kids who does not need a thing thanks to her sisters' hand me downs.

Wednesday the girls decided to make a lemonade stand. They managed to sell 15 dollars of homemade lemonade in less than an hour. We ran out of lemonade pretty quickly so the girls decided that they were going to invest some of their profits ($12!) in a second pitcher so that they would be able to sell more lemonade next time. Later that afternoon the kids had a great time swimming with some friends who have a pool in their building.

Last summer we had heard that there was going to a free Gazillion Bubble Show in Union Square Park. We didn’t go because we thought it was going to rain (of course it didn’t). When we found out that there was going to be another free performance this year on Thursday morning we (the girls and our neighbor E) decided that we had to go. It turned out to only be a 5 minute preview of the show. We were definitely disappointed but we did learn that we did not want to spend 50 dollars per seat to see an hour's worth of a man blowing giant bubbles.

After a quick pit stop I realized that we were a 10 minute walk from another one of our favorite clothing stores Space Kiddets. We found some great clothes for Shabbat on sale that will also work for the fall so we were very excited. That afternoon R’s friend N came over and the girls wrote a play called “Detention” which featured vignettes of kids in detention. It was actually pretty good!

N slept over Thursday night and on Friday morning the girls wrote another play called Starbucks. It, of course, featured vignettes of people in Starbucks (notice a theme here?). When N left I took the girls with me to the Farmers Market and Whole Foods and spent the rest of the day preparing for Shabbat.

On Sunday we had plans to go to my Parents' for a 4th of July BBQ. I was, however, determined to do a better job tie dying with the girls before week one was up. That morning I got out the dyes (unintentionally red and blue) and some more tee shirts and we took another stab at it. I think they came out much better the second time around. 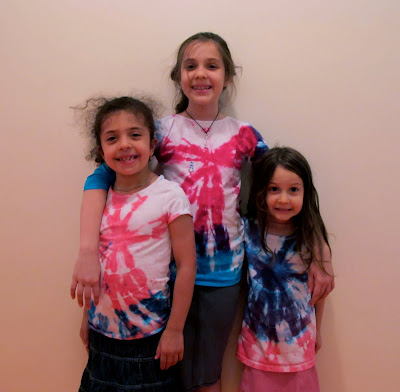