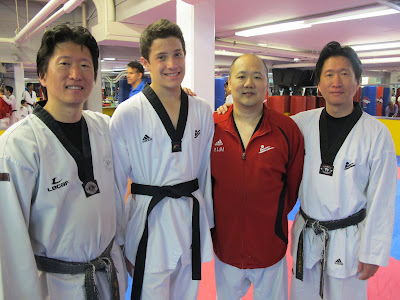 Z took his black belt test in Tae Kwon Do on Tuesday night and he passed! It was an absolutely grueling 40 minute test. First he warmed up with squats and knuckle push ups on wood boards (ouch!), then he did all his forms, kicks and punches.The test ended with sparring. His partners were nationally ranked athletes and his job was to get in a few kicks and punches and to show that he could basically "take it". I can't imagine ever being able to do what he did when he took the test and needless to say I am very proud that he was able to. It's really his first big accomplishment.

When he started 7 years ago he was not a natural and it was not love at first sight. He enjoyed the classes but his ability to pay attention depended on what they were doing at any given time. If it was relay races he gave it his all. If it was just practicing kicks or punches he was often staring into space. The drills were just not that interesting for him. It became clear that if he was to continue doing Tae Kwan Do he was going to need some one on one attention. He began taking one private lesson a week with Miss L who was very patient with him and managed to keep him engaged. About two years after he started the private lessons I found out that Miss L was leaving NYC to get married. I was happy for her but upset for Z. I was not sure if there was another teacher at the school who would be as good a fit for him.

At the same time that Miss L left, my husband, who had been a brown belt in karate, decided that he wanted to try Tae Kwan Do. It was then that he became the driving force behind keeping Z interested and engaged. Z began to go to the evening classes with his dad and J helped him to stay focused in class. It wasn't always easy. There were times when Z was not sure that he wanted to keep going. We (mostly J) managed to convince him that he should. As Z got older he began to enjoy it more and more and he began to appreciate the fitness aspect of Tae Kwan Do. One of his favorite classes became advanced conditioning.

There is about a 2 year wait between the red with a double black stripe belt and the full black belt. During the wait there were moments when it was difficult for Z to keep his eye on the prize. Last December he was told that he would be ready to test for his black belt in June. This meant that he needed to step it up. He had been going twice a week but he needed to start going three times a week. It was a bit of a struggle to get him there three times a week at first but we managed to eventually get into a rhythm when his basketball season officially ended.

For the six weeks or so before the test Z happily went to class 3 times a week and I never had to nag him to go! I felt like there was this momentum leading him forward. He did not seem nervous about the test even after J told him that he had to make sure not to take what happened during the sparring personally ( J was basically telling him not to get upset when everyone was beating him up!).

The days after the test I couldn't stop thinking about it and how well Z had done and I joked that he had been possessed by the soul of a Ninja. The truth was that past seven years were part of the process that delivered Z to this place where he excelled as he never had before. Now if we could get him to work this hard in school next year.....
Email Post
Labels: Teenagers